I have been interested in sandtray therapy from the time I first saw the shelves in a colleague’s office, but since she worked with children, I assumed, as many people do, that sandtray was for children. 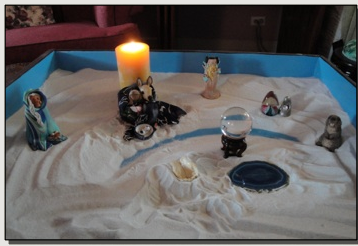 Then, about 12 years ago, I had a client who told me she had difficulty remembering what we did in therapy because, at that time, so much was verbal, and she was not at all auditory.  I decided to join a sandtray training and learn just enough to help this one client. But as I sat in the training, two figures seemed to want to leap off the shelves and jump into my tray of sand.  When the time came for me to choose items from the shelves, I chose these as well as others as I created a sandtray world. 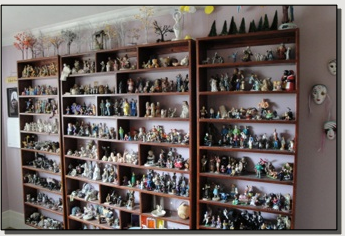 As I moved these figures in my own sandtray, I understood why they had felt so captivating to me.  This was ultimately an empowering experience for me.  What had been a vague internal process all of a sudden became clear to me in a tactile, tangible way.  It was palpable how I could move some figures in the world, while others, I could move in a more limited way, or not at all.  This brought me in touch with what was stuck in the way I was creating my real life world as well and what I needed so that I could eventually get unstuck. 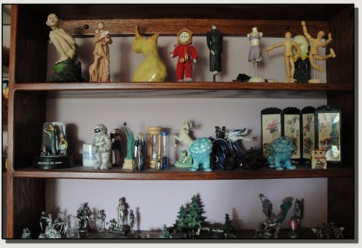 This experience  led to my taking many more workshops and forming a formidable collection of figures of my own. When you create a sandtray, you create a world that is something like a waking dream.  As you create this world, you learn about the figures you chose, their relationship with the other figures, and discover what this world is attempting to communicate to you.  In this way, you learn more about yourself, what is supporting or tormenting you, and ultimately, how you can heal.